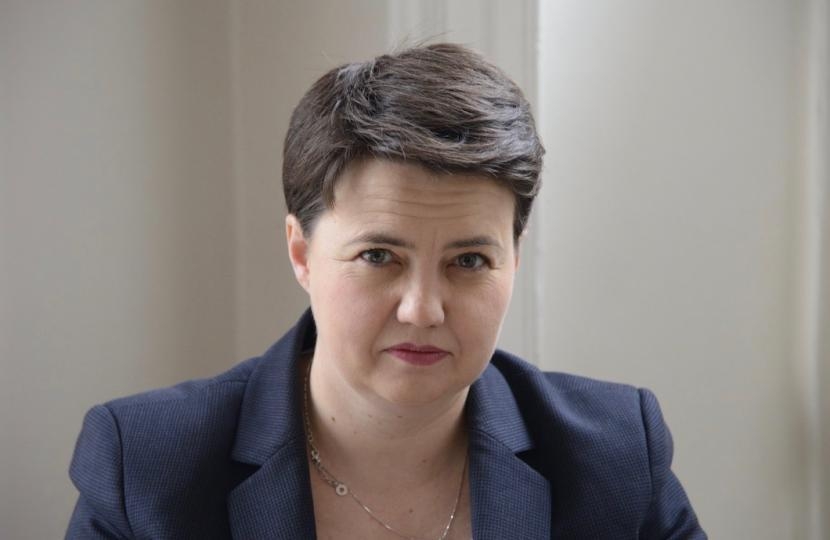 Ruth Davidson has visited Afghanistan during parliamentary recess to highlight the remarkable work of a Scots-based charity leading the world in mine clearance.

The Scottish Conservative leader spent four days in Kabul at the invitation of the Dumfriesshire based HALO Trust - now the world’s largest humanitarian mine clearance operation.

During her visit, the Trust handed control of 95 million square metres of land in western Afghanistan back to the local government – following a ten year long operation to remove landmines and unexploded debris from the area.

Ruth was given training on how to find, excavate and remove land mines and exploded an anti-personnel mine during a training exercise.

She met members of the Afghan government to discuss security and also spoke to female Afghan MPs to discuss women’s participation in politics.

The visit was organised by the HALO Trust and follows Ruth’s long-standing support for the charity.

She has spoken at length about the need for Government to support its work in ridding war zones of mines and other lethal weapons, allowing communities affected by conflict to return to normality.

In a week of negative publicity surrounding Britain’s aid effort, she said the visit had demonstrated clearly how UK-based NGOs, such as HALO, are getting on with the job of saving countless lives and improving the lives of the world’s poorest people.

“The HALO Trust is one of the great Scottish success stories. From its base in Dumfriesshire it now has around 8,000 full time staff around the world operating in conflict and post-conflict zones. Literally millions of families have been able to return to their home safely thanks to its work. As a long-term supporter, I was honoured to have been asked to see its work for myself.

"Every region in Afghanistan is affected by mines and while some have been laid during the current conflict, thousands are left over from the wars of the past. Every minefield has the capacity to maim and kill civilians and they stop local people from being able to farm, build or even travel certain key routes.

"Learning the techniques of landmine clearance has shown me just how dangerous and painstaking the work is.

"HALO’s staff are committed to ensuring that every part of Afghanistan has a future and every person living here has a chance to go about their daily life without the threat of stepping on one of these killing machines.

"The UK government has recognised the importance of this work and how vital it is in helping some of the poorest and most unstable countries in the world to develop and become safer, more prosperous places. This means they can recover to the point where they no longer need help from the international community.

"With so much attention on the work of NGOs this week for all the wrong reasons, it has been a privilege to come to Afghanistan and see this life-changing work in one of the most difficult regions on earth.

"This is the real story of what aid money can achieve. It is changing lives, and the world, for the better."

“Not many politicians get to visit Afghanistan and it takes a certain sort to face its dangers only a few days after some major attacks.  Ruth saw for herself the work of the 3,500 HALO staff who work across the country.  She also witnessed the amazing contribution that UK DFID is making to clearing the country of landmines. DFID’s support is saving lives and creating livelihoods.”

“It’s 30 years since HALO started its life saving work in Afghanistan.  In that time, governments have come and gone and war has ebbed and flowed.  We have stuck the course.  Far from leaving Afghanistan, my vision is for an NGO that strengthens not weakens its commitment to the country.  HALO therefore has plans to employ yet more Afghans and give them a peaceful alternative to war, clearing the debris not only of previous conflicts but dealing with today’s lethal weaponry.  As Afghanistan’s population grows and pressure for land increases, one day we would like to see all of the country’s land restored to productive use”